I want to tell you about two Canadian athletes, who are going to be representing our country, and also our area, this year. Their names are Wendy McCoubrey and Lolita. I have had the pleasure of riding with Wendy over the years, and I saw Lolita as a day old filly when my horses were boarding at Lynda Townsends (Wendy’s mom) farm. I have had many talks with Wendy about her goals, and when asked what is the best equestrian sport where there is a partnership and that the animals are not overextended, I have always felt that it is endurance. This is the marathon of the equine world. It is truly a sport where rider and animal must both be fit and work for hours on end during a competition. Many may not realize, but to sit in a saddle for 160 km requires somewhere between 8-12 hours of riding time, usually at a canter or trot. When I go for a Wendy ride, which is usually 2 hours, I can barely walk the next day. And I consider myself fit!

Wendy’s motto is “Team with a Dream” because that is exactly what she and Black Bart’s Lolita are. She will be competing in a World Endurance Championship (WEG) on a homebred horse which her mother and my friend, Lynda Townsend, bred and raised. Lynda has bred many spectacular athletes but it has taken all these years to produce this super talented mare. She is a superb horse woman, and any knowledge that I have about training and working with horses is largely due to her, as well as Wendy.

Black Bart’s Lolita is a ½ Arabian – ½ Standardbred, 9-year-old black mare. She was born and raised at their farm in Ste Justine De Newton. Lolita and Wendy started their journey 2 and a half years ago. Lolita was 6, a good age for horses to start, as they are mature, and their bones have all finished growing. In the 2015 /16 season, Lolita went to Florida and achieved her novice qualifications with flying colours.

The final qualifications for WEG-2018 began in 2017. The goal was to meet the demanding selection criteria set by Equestrian Canada for endurance. Canada’s qualifications are a little harder than FEI minimum requirements to ride at a World Championship. The human athlete (Wendy) must successfully complete five 120km (75 Mile) competitions or greater with a completion average of over 75%.Wendy met and exceeded this criteria with a 100% completion in 2017.

For the equine athlete (Lolita), Canada requires 4 FEI rides of 120km (75 Miles) or greater with a completion rate of 70%. They did their first 80km (FEI) which is called a 1*star, then on to 2 x 120km (2*stars) where Lolita finished strong and received the Best Condition Award. They then  moved on and did 2 x 160km (100 Mile) which is called a 3*stars ride,  where they obtained their COC – Certificate of Capability in a ride time of 11 hrs 14 min. You must have a COC in order to qualify to compete at a World Championship which is a 4* stars ride.

Training at this level is a full time job, and like any professional athlete, Lolita and Wendy work 6 days a week, for a minimum of 3 hours per day. Whether it be in the arena working to keep Lolita supple over trot poles, on the trail or walker/exerciser, the time and commitment is extraordinary. The next 6 months will be working on keeping both human and horse fit and sound and ready to peak on Sept 12, 2018. From the time Wendy was very young her dream was to ride and represent Canada.  This is why we call it the Team with A Dream, because her dream is now going to be reality.

So it is my pleasure that we will sponsor Wendy and Lolita in their journey with a fundraiser this spring- May 26, at my daughter’s farm, Blackbird Meadow. We will have a real old fashion “hoe-down” square dance, spaghetti dinner, farm animals for all to visit and best of all, “cow plop” Bingo. People can come to meet Lolita and Wendy. Sending a horse to this level of competition is terribly expensive, and there are not huge companies sponsoring these athletes, so I am happy to be able to do a little.

So mark your calendars, with more information to follow- but in the meanwhile, donations for a silent auction to be held at this event will be greatly appreciated. Contact me at timberleavet@hotmail.com if you have anything- it does not have to be horse oriented!

Look Wendy up on Face Book, become her friend and ride along with the “Team with a Dream” as they               make their way to the World Equestrian Games. 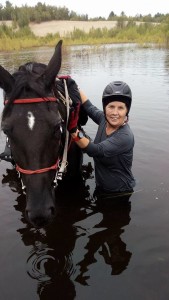