Thirty years ago, specialists were rare. Nowadays, they are plentiful. The difference is, now young vets feel most diseases need to be seen by a specialist and get mired in decision making. They need a “specialist” to agree with their disease before treating it. This is fine, but the result is additional cost to owners, and quite often, repeating tests from one clinic to another.

Orthopedics has always been one of my passions. I took courses on plating, but soon realized the cost of the plate (approx. $1000) and individual screws (approx… $25) made it exorbitant to even start a procedure. Added to the fact that we don’t get these weekly, I feel it is better to refer these cases to specialists. However – pins and wire are inexpensive and can do amazing things. There is rule in orthopedics- in order to stabilize a joint with external fixation, one needs a joint above and a joint below. Which means femurs and humerus require internal fixation. 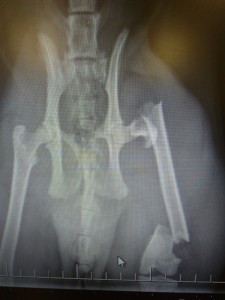 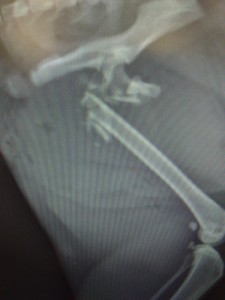 Last year, I was presented with a cat, whose name coincidentally happened to be Stitch. He had a comminuted fracture of his femur, and amputation had been suggested by 2 vets.  I happened to know the owner quite well, and asked if she would be ok if I tried to pin it. Amputation is so final, and if it could work with a pin, the cat would be better off. She agreed.

The fracture was worse than I thought when I went into surgery- there were many pieces, and some were so small, that I would not be able to put them into the repair. However, after some time, rather like a jigsaw, I fit it together as best as I could. We closed up, and placed a large bandage on the leg to reduce the cat’s mobility. Then we waited. 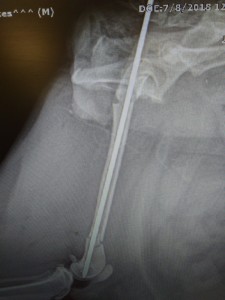 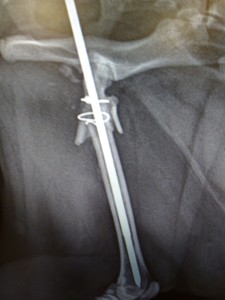 After 4 weeks, the pin had started to move, and we had to go remove it. A good callous had formed, so I felt after another week of rest… Sure enough, at week 5 Stitch started to walk. He did limp, but he was weight bearing. We were so excited. A few months later, I was sent a video of him running around. I could not tell which leg had had the surgery. He had stitched himself together.

Recently, I had a rescue cat referred to me from someone who works at the DMV clinic- cost was prohibitive, and they originally were looking for a quote for amputation. However, because of my experience with Stitch, I felt it was worth trying to save this one’s leg also. This time, the bone was broken in 2 places, which meant circulation to the bone may be compromised, and we could end up with a non-union. But I convinced the shelter to let me place pins, offering an amputation if it did not work at no charge later on. This is always my fall back!

This cat, Fawkes was a special character. My eldest son and girlfriend were looking for a cat, and I suggested him. The rescue was thrilled, as they knew if there were any complications he would be taken care of.  The first four weeks of a surgery are always the most stressful- infections can occur, non-union of the bone can occur, and sometimes the pins break. I always tell clients that I do my part to the best of my ability, but then the rest falls on them- keeping them quiet means cage rest, no running and no stairs. It astounds me how many people fail to realize the importance of this.

Fortunately for us, Fox (as he is now named) healed well, and his pins were removed. Two happy endings! 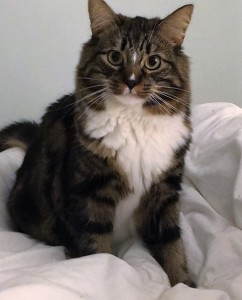 Not all of my attempts are successful, however, I have enough to make me continue to offer these cost effective alternatives. It certainly gives me pleasure to have an animal walk successfully, and it also is a change from daily routine surgery.