It all started out with a phone call, as it usually does (or a txt, or a messenger message) “Amanda, I can’t handle it anymore, he is left there day after day on his own and if I didn’t feed or water him he wouldn’t see anyone”

Now to most people, this would constitute neglect. But to the laws of Quebec, if an animal has shelter, food and water, his minimal needs are met. For anyone who knows and loves animals, we recognize that they need more than this. They need companionship (human or otherwise) as well as movement. A 10 foot chain, many owners version of “invisible fence” is not going to cut it.

So this began a series of events which felt like a mission impossible. I invited myself over for lunch and we then went to visit the dog. The buildings were ramshackle, and the dog was in a barn chained to his “kennel”.  This 100 pound giant with a head the size of a bear lumbered out to meet us- his tail wagging slowly. He immediately rolled onto his back, his matted grimy coat revealing a hairless belly, where he enjoyed being touched- he couldn’t feel our hands on his body. The thick hair was urine stained, and an inevitable cesspool to develop hot spots, then maggots. Feral cats hid in corners, and were probably the only things alive to keep this dog company. My friend was feeding and watering them as well, but at least they could come and go.

She was asked to look after the dog in January when the original elderly owner was taken away. Thinking it was going to be a short time only, she agreed. Six months later, with repeated attempts asking the adults who would visit once every two weeks if she could take the dog home, she found herself thinking of committing a crime. Dog stealing. Grand theft canine. So of course, she would implicate her friend the veterinarian at the same time.

After visiting Bear, it became apparent that we had to do something. Making a complaint with the SPCA sounds logical, but because there is no abuse (emotional doesn’t count) we were running a risk of months going by. So I did the only logical thing- arrange to have him meet my friends dog  to ensure he was dog friendly, neuter him at my low cost spay neuter clinic (I had Montreal dog blogger Liliana Daniels having donated some money via “Paw it forward”) and I would foster him. 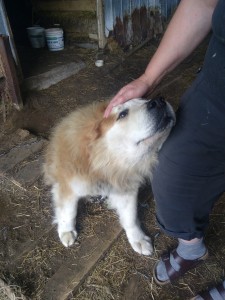 With this plan in mind, the worlds were cosmically aligned. I was asked to do a house call euthanasia that same day at another friend’s farm. It was her old Doberman, and as we cried she said to me “If you ever have an older dog needing a home think of me”. A light bulb went off in my mind. “Are you serious? You won’t believe what I saw this morning”.  It would be perfect- he was used to farm life. He would be off leash forever!

On Sunday, I rallied in my staff to volunteer some time to help me shave him after surgery. Darrach and Jordan came to the rescue, and Susi provided us with the appropriate blades to shave him up. It took an hour and 2 people to remove the matted coat. Vaccines, deworming, de-miting (he had ear mites) and testing him for heartworm/lymes were all done. He had been dog tested- and showed no signs of aggression. This was good because my friend has some small dogs as well.

So on Monday, he went to his forever home. We nicknamed him Bear, because of the size of his face, but he looked more like a lion.  We will see how he looks once a normal coat re-grows. Most importantly, it turned out that the original owner had managed to be convinced to relinquish his dog. So no laws were broken.

He has settled into his new life as if he was just waiting to be there. His first 8 years were just the time spend until this final end. As we commented on how all the pieces just fell into place, my friend just said “it was serendipitous”. 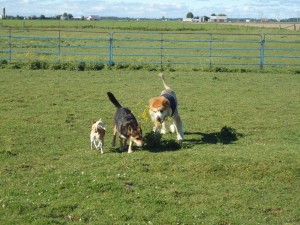